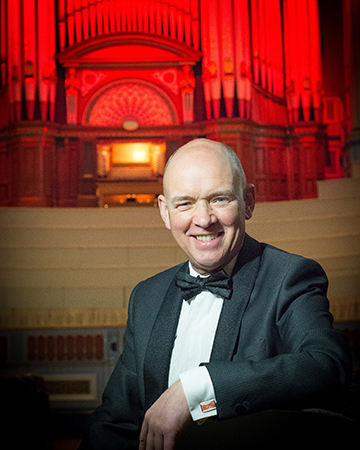 FOCHO’s Honorary President Gordon Stewart joins us for the first of four 2022 summer concerts presented by Leisure & Culture Dundee and supported by FOCHO.

Help us celebrate the tenth anniversary of FOCHO by supporting our four excitingly varied ‘Town Hall’ style programmes showing off the Caird Hall’s fantastic Harrison and Harrison organ in all its glory… from gentle strings and lyrical flutes, to the mighty trumpets and trombones, it is truly ‘the finest concert organ in Scotland!’

All concerts last approximately one hour, with the opportunity to meet the artist in the cafe bar after the performance.

Gordon Stewart was born in Dundee and after studies in Manchester and Geneva with Gillian Weir, Eric Chadwick and Lionel Rogg, he was for 15 years a cathedral organist, first in Manchester then in Blackburn. Earlier this year he was appointed Organist Emerititus of Kirklees after 30 years as Borough Organist during which he played regular concerts on the 1860 Father Willis organ in Huddersfield Town Hall.

He has recorded on organs in the UK and in South Africa on the Priory, Dolcan and Lammas labels and has played concertos with the BBC Philharmonic Orchestra, the Northern Chamber Orchestra, Orchestra of Opera North and Orchestra Victoria. For over 20 years he broadcast regularly as organist and conductor on BBC radio and television, chiefly as a musical director on Daily Service, Sunday Half Hour and Songs of Praise.

Gordon’s repertoire is large and covers all the major schools of organ composition. He is well-known as a teacher and after several years as Senior Organ Tutor at the Royal Northern College of Music, became one of the organ teachers at Cambridge University, teaching the organ scholars at, amongst others, King’s, St John’s and Jesus Colleges. He has appeared as visiting tutor at courses for the Royal College of Organists, Oundle Organ Week, Gothenburg Organ Academy and Shenandoah Church Music Institute in Virginia.

Gordon has played concerts throughout the UK including Celebrity Concerts at St Paul’s Cathedral, Westminster Abbey, Westminster Cathedral and Symphony Hall, Birmingham, throughout Europe, and in the United States, South Africa, Australia and New Zealand.

Gordon is Honorary President of the Friends of the Caird Hall Organ.

2500
REGISTER
Registration is closed for this event.For more information or questions, please email: