Come and Sing with Paul Mealor 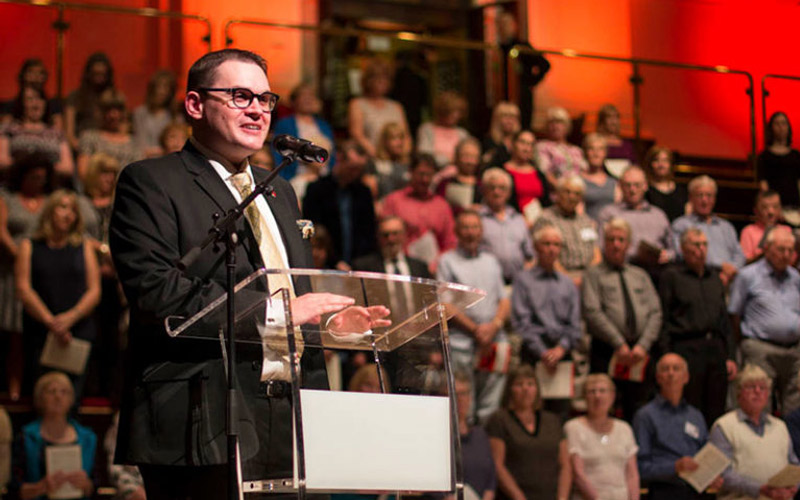 Our second Come and Sing with Paul Mealor, on 29 September 2018, was a great success. One hundred and thirteen singers assembled to rehearse and sing Vivaldi’s Gloria, Parry’s anthem I was glad and Paul’s own setting of Let all the world in every corner sing. Unfortunately the arrival of our celebrity conductor was delayed by a family crisis, but our past chairman, Walter Blair, stepped forward willingly and got the rehearsal under way in his calm and skillful style! By the time of Paul’s arrival the singers were warmed up and ready for the rest of the afternoon’s hard rehearsal work. After a well-deserved tea break, the choir was joined in the evening concert by soloists Frances Cooper (soprano) and Carole Clarke (alto). City Organist Stuart Muir was on top form at the console, coping masterfully with the hectic demisemiquavers in the accompaniment of Let all the world. He faced strong competition from percussionist Peter Ney on tubular bells in the final section, but you won’t be surprised to hear that the Caird Hall Organ was more than a match, especially in the final bars – marked fff, followed by a crescendo! Throughout the concert the enthusiasm of the singers was evident, and audience members commented that they could hardly believe that the choir had come together for the first time only a few hours earlier. We have recruited several new members of the Friends, and when final financial figures are calculated we expect to have raised a significant sum to help our efforts in supporting and promoting the organ.